If you would like to buy any of our books, please send us an email stating

Title and Quantity of Books.
Any special dedications.
Address to send them to.

An invoice will be sent along with the books which will have a $5 postage and packaging charge for books sent within NZ.
Books going overseas will have a different rate.

If you are buying for a bookshop please state this.


Join Kestrel and Skye on a circus tour filled with codes, villains, and Danger!


These books are perfect for the newly confident reader. Age 6+

Book 1 RRP $12.00
A strange letter and code propels the circus into a tour they will never forget.
The mysterious Puzzle Master has invited Circus Charles to once again compete
to find the best circus in the world. But not everyone wants them to win
Will they be stopped like last time? 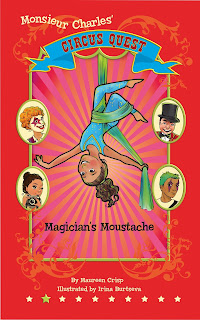 Book 2 RRP $12.00
Skye discovers that hanging upside down isn't always magic.
With a guide rope on the Big Top snapped, the first show of the new
tour is off to a bad start.  The next clue is hidden in a clock. Unfortunately
the town of Papenton is filled with clocks! 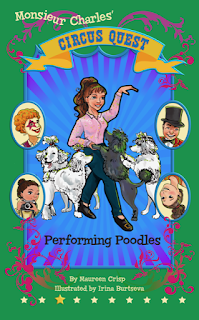 Book 3 RRP $12.00
Kestrel is out performed by a poodle?
The clues are getting harder. When Pepper the performing
poodle is dognapped, Kestrel races to the rescue.
Is he out of luck as well as out of time?

Crisp’s writing is full of show, not tell; great for making children think a little deeper about the book. Readers do need to be paying attention, as the solutions to each puzzle will not be handed to them on a platter, they’ll have to work at it a bit. There’s lots of detail about circus life and performances to intrigue readers, and some interesting character name choices (for example, the sons of the Falcon family are Peregrine and Kestrel).

Crisp’s writing is full of show, not tell; great for making children think a little deeper about the book.

The illustrations and overall book design are well done and will engage younger or less-confident readers who are not ready to transition to straight-text chapter books. At 78 pages each they won’t overwhelm a reader with their length, which is really important as children develop their confidence.
The Sapling

A new, fun series set in the lives of circus performers. Young readers will discover what goes on behind the scenes of all the acts. There are routines to be learnt, tricks to perfect, hard work to be done preparing the equipment and safety gear, not to mention the packing, erection and unpacking of the Big Top itself.
But there are devious people among them. Kes and Skye could be in real danger as they try to work out who is causing the circus’ troubles. Intriguing and exciting, drawing the reader from chapter to chapter; this will be a popular series for emerging readers.
Adele Broadbent- What Book Next

The 2nd in this series, emerging readers can follow Kes and Skye’s quest and try to solve the clues themselves. Not only are there puzzles in the books, the back covers hold another.
Adele Broadbent- What Book Next

Circus Quest Bk1: The Playbill by Maureen Crisp, illus. Irina Burtseva. Pub. Marmac Media, 2018.
This is the first of 10 books from the Circus Quest series for junior and newly confident readers. Each novel has a clue to solve which leads to the next one.
The Circus Charles will finish if they don’t complete a challenge and if they do complete the challenge they will join the top circus companies at the Circonvention.
Budding trapeze artist Skye and her brother Kestrel who is a clown are responsible for solving a series of clues that will give the circus a chance of survival. On top of that their mother is missing, their father is behaving mysteriously, and a series of accidents
suggests there is a traitor in their midst.
Firstly they have to solve the problem of where the clues are. See if they do.
Easy to read with big font, short chapters and only about 80 pages per book. A great way to get  youngsters into reading.
Bob Docherty from Bobs Book Blog

Circus Quest Bk2: Magician’s Moustache.
The first venue of the Circus Charles tour is at the island town of Papenton,  which is famous for it’s hundreds of clocks.
Skye and Kestrel after finding the key to the clues of the challenge to save the circus, deduce that the next clue is in a clock. But which one?
Already the traitor has sabotaged a rope to the big top and other accidents are about to happen. Who is masterminding these acts? There are some shifty characters involved.
Skye deduces the rhyme Hickory Dickory Dock is a clue and if you know the rhyme you the reader are half way there. Skye shows her trapeze skills to find the next clue which is a written code. I solved it but can you?
Another good thing about the series is that the characters are drawn at the front by illustrator Irina Burtseva who captures the characters, the circus and the action very well in black and white pen drawings.
A series to keep an eye on.
Bob Docherty from Bobs Book Blog 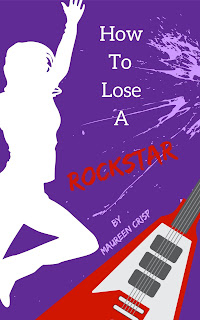 RRP 18.00
Can friendship survive lies, a famous rock band, obsessive fans and your own family?

Sonia found her best friend online and can’t wait to meet her.
Tressa has carefully faked a boring life. She needs her family to pretend to be normal for one week.
With her rock star father, a media frenzy, a film obsessed brother and a bunch of star-struck fans.... Faking normal just got a whole lot harder!

************************************************
Advance Review
Book review: How To Lose A Rockstar by Maureen Crisp
How To Lose A Rockstar is about friendship and everything that gets in the way of being honest when you’re navigating life’s unfair traumas and fragile hopes.
If that sounds heavy, it’s not. This is storytelling at its best with humour and emotions beautifully balanced. Two teens, Sonia (Kiwi) and Tressa (Irish) meet online but when Tressa visits New Zealand and meets Sonia in person, Tressa’s big secret threatens to destroy everything.
Add to the plot a couple of irritating brothers, a large cast of family, neighbours and band members and you’ve got a story with enough of the ordinary AND the incredible to really make it zing. I loved it!